This year, starting in mid-March, thousands of migrating Tundra Swans stopped at the Thedford Bog (a designated Important Bird Area) near Grand Bend, Ontario on Lake Huron and stayed for 13 days. This was some ten days short of their average stay of 23 days over the last 13 years, according to the Lambton Heritage Museum’s statistics (click on “Swan Migration/Discover More”). The Thedford Bog is an important staging area on their annual 6000 km round trip migration to the western Arctic from the eastern USA.

The reasons for their shorter stay could be manifold, but the question has to be asked: does some of it have to do with the fact that the resting and feeding swans are now effectively surrounded by industrial wind turbines on three sides, disturbing their rest and search for food? 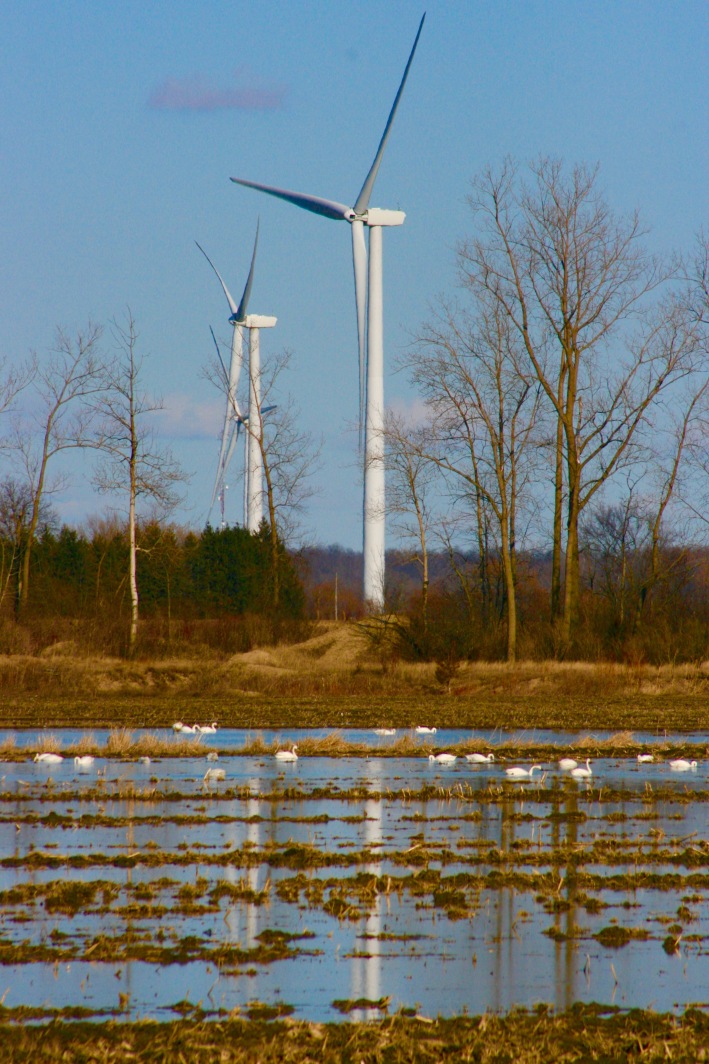 NextEra’s Goshen industrial wind turbines are thankfully not located directly on the swans’ resting spots, but are close enough and could pose problems for the birds as they fly to the corn stubble fields in the wider area to feed. We know that the lethal blades of wind turbines butcher millions of birds and bats annually worldwide (insects too). But if NextEra’s wind turbines slaughter Tundra Swans or Bald Eagles, the company and all Ontario wind facilities get a free pass, even for endangered species. Under Ontario law, the wind industry suffers no consequences if it “kills, harms or harasses a member of a species that is listed on the Species at Risk in Ontario List as an endangered or threatened species, or damages or destroys the habitat of such a species…”

Tundra Swans at the Thedford Bog flying close to the slicing blades of industrial wind turbines, scouting for food and rest

It is dispiriting driving on the Bluewater Highway (King’s Highway 21), which runs through one picturesque coastal community after another, along most of the entire length of the eastern shoreline of Lake Huron, for roughly 192 km from the Lambton Shores in the south to Southampton in the north until it turns east and inland to cross the Bruce Peninsula. Almost the entire way along the lake, drivers face a bristling phalanx of industrial wind turbine installations, kilometre after kilometre, despoiling the beautiful pastoral and shoreline landscape.

It hurts all the more when you know that industrial wind turbines have absolutely no redeeming value except for their subsidy-dependent, usually foreign, owners. They are dangerous, useless, ungreen, and both economically and environmentally destructive. The only saving grace is that the wind turbines along Lake Huron have not been situated between the highway and the lake. But that makes no difference when you look east or, for example, gaze northwest from the wonderful beaches at Grand Bend from where they ruin the view. Coastal beauty vistas, with huge tourist potential, ruthlessly despoiled for the fake planetary emergency of manmade climate change, the rationale for so-called green energy schemes such as the monstrously ineffectual industrial wind turbines.

Beach near Grand Bend looking northwest at long line of industrial wind turbines – not the vista you want to see on sunny, beachy days, or at any time

How did this happen? The scourge of industrial wind turbines has been inflicted on Ontario, including the breathtaking Lake Huron shoreline, because of the massive UN-led deliberate scientific deception that the carbon dioxide produced by man’s use of fossil fuels is a demon gas that will overheat the earth and kill us all. Actually, carbon dioxide, i.e. CO2, is a non-polluting trace gas that you cannot smell or see, without which there would be no life on earth. The manmade global warming/manmade climate change $1.5 trillion industrial complex is driven by a pernicious anti-human political ideology, with not one whit of care for the environment or the scientific method.

The UN’s malign objective behind this deception is a bid for unelected, unaccountable global governance, the abrogation of national sovereignty, of democratic freedoms, and of property rights, and anti-human plans for de-industrialization and wealth re-distribution (as detailed in the UN’s Agenda 21, the Millennium Project, Agenda 2030). Many of Canada’s governments at various levels, including the current “climate action”-obsessed federal Trudeau regime, have fallen in line and imposed economically-ruinous “green” policies and taxation schemes in order to obey the UN’s diktats.

It is beyond tragic.

Another Kafkaesque industrial wind turbine nightmare in Ontario. A regional airport (Collingwood), with an aerodrome close by (Stayner), and eight 500’ (152 metres) air-space-invading industrial wind turbines (wpd Canada’s Fairview Wind Project) to be wedged between both airfields, posing grave danger to pilots and their passengers—and the whole thing approved by the Ontario Liberal government.

What could possibly go wrong when pilots, flying visually without instrumentation (as is the case in over 90% of the flights at these two airports), have to negotiate a safe take-off or landing through a blur of Georgian Bay fog, or lake-effects snow, and an indiscernible phalanx of gigantic 50-storey-tall white windmills?

All eight of the planned wind turbines will “penetrate” the safe arrival and departure airspace mandated by Transport Canada standards.

The Collingwood-Stayner airspace is a no-man’s-land of regulation, a lawless vacuum with respect to wind turbine installations. Ontario’s Green Energy Act deliberately has no safety provision for wind turbine setbacks near airports. All eight of the planned wind turbines will “penetrate” the safe arrival and departure airspace mandated by Transport Canada standards, as prescribed by the International Civil Aviation Organization.

If the turbines are built, and they thereby are found to create an unsafe situation, Transport Canada could shut the airports down.

However, here is the kicker. Transport Canada has no jurisdiction over where wind turbines are located with respect to the air space of registered, uncertified airports such as the Collingwood Regional Airport and the Clearview Aerodrome in Stayner. But, when the turbines are built, and they thereby are found to create an unsafe situation, Transport Canada could shut the airports down. The airports, not the wind turbines!

In this case, there is a dangerous jurisdictional vacuum. Neither Transport Canada, nor the Ontario government, nor the local governments, which the Liberals’ Green Energy Act stripped of their planning powers, have any legal say over the aeronautically-safe siting of wind turbines at registered, uncertified airports.

Wind companies—often foreign-owned—pretty well get to do whatever they want.

Such is the looney landscape of Ontario’s sickly “green” wind energy program that wind companies—often foreign-owned—pretty well get to do whatever they want, aided, abetted, enabled, financially rewarded, and legally defended by the Ontario Liberals’ Green Energy Act and their kangaroo court of (hopeless) appeal, the Environmental Review Tribunal (ERT). Only two of the scores of wind turbine project appeals to the ERT have had partial success, with final outcomes still pending.

wpd Canada’s Fairview Wind Project between the Collingwood-Stayner airports is being appealed, with an ERT hearing scheduled for May 16, 2016 in Collingwood. What are the chances that the safety-minded appellants will prevail? The onus is on them to prove “serious harm” to human health. You’d think that this would be a no-brainer, logical, obvious. But the narrow terms of reference by which the ERT operates and the unfair burden of proof heaped on the appellants usually spell defeat.

For a mind-blowing overview of this particular Kafkaesque situation involving wind turbine approvals and appeals, watch the 30-minute media event held at Queen’s Park on April 21, 2016 (starting at 3:09). At the press conference, Simcoe-Grey MPP Jim Wilson, Kevin Elwood (the pilot owner of the Clearview Aerodrome), and Charles Magwood, area property owner, outlined chilling facts about the lawless loophole that could endanger the lives of pilots and their passengers, and potentially close down an economically vital airport and aerodrome for good.

The trio also discuss possible graft and corruption in this case: wpd Canada’s payments made to the Liberal party, followed immediately by government approvals for wpd Canada’s project, and wpd Canada’s creation of a shell company with no assets in order to evade liability for accidents and de-commissioning of wind turbines.

The Environmental Review Tribunal has ruled to revoke the approval for eight 500-foot-tall wind turbines in an area near the Collingwood Regional Airport.

WPD Canada has decided not to appeal a decision of the Environmental Review Tribunal to revoke the renewable energy approval (REA) for the Fairview Wind Project.

Local taxpayers will be on the hook for the successful challenge to a plan to erect eight turbines in Clearview Township.

The same goes for Kevin and Gail Elwood, John Wiggins, and the residents’ group Preserve Clearview, after the Environmental Review Tribunal dismissed an application for costs related to their appeal of a decision to grant WPD a renewable energy application for the Fairview Wind Project.