The CBC’s science illiteracy and grand delusion of journalistic balance 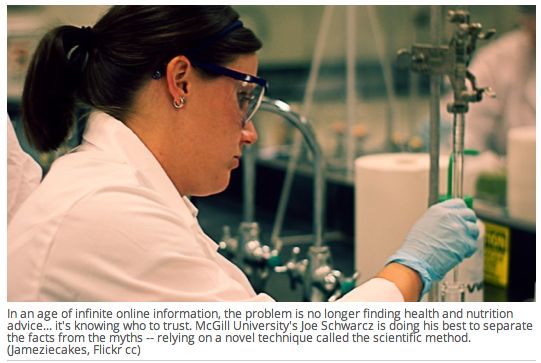 Above: CBC’s photo and caption

The website of its radio program, The Current, has this caption underneath the photo of a generic scientist:

McGill University’s Joe Schwarcz is doing his best to separate the facts from the myths — relying on a novel technique called the scientific method. (Emphasis added – see above.)

Scientific method a novel technique, CBC?! It’s only been around in its modern form since at least the first half of the 13th century, and its underpinnings go back to Aristotle!

The delicious irony being that this caption is part of a segment that is supposed to be about separating fact from fiction in science reporting and blogging! (The Current‘s guest, Joe Schwarcz, Director of McGill University’s Office for Science & Society, has written a new book that he says is intended to “separate sense from nonsense and to give good, reliable information …”)

A serious problem with the clueless CBC (and, with a few notable exceptions, the majority of the mainstream media) is pretending to be scientifically savvy and journalistically objective when actually woefully uninformed, and biased to boot, especially so when it comes to the hypothesis of manmade climate change.

The fact that the CBC seemingly has zero knowledge about the scientific method explains why it eagerly and ignorantly regurgitates every apocalyptic prediction emanating from the UN/IPCC’s climate computer models that have consistently failed to match real-world evidence and data, and why Canada’s national broadcaster never seems to invite any sceptical scientists or experts to join the discussion.

The Current’s segment highlights the extent of the CBC’s delusion about its journalistic skills and objectivity, and its utter failure to act responsibly in reporting on climate science. In fact, the publicly-funded CBC is one of Canada’s most prominent propaganda organs for promoting the scientifically unproven hypothesis of manmade global warming/manmade climate change and the spectre of a non-existent global climate catastrophe.

Who is trustworthy? … evaluation of information is paramount … the only way you can do that is by having a solid scientific background, by being aware of the peer-reviewed literature, by being aware of how we in the science community claim to know what we know ….

Later in the segment Joe Schwarcz continues by saying, “We don’t have concrete answers to everything” and “Real scientists don’t make dogmatic remarks.” Then,”real scientist” Joe Schwarcz, Ph.D. in Chemistry, completely contradicts himself and feels free to make a concrete, dogmatic statement about manmade climate change.

Before that, however, Schwarcz opines on journalistic fair balance:

… just because there are diverse opinions on many scientific issues it doesn’t mean that they should carry equal weight . . . but in journalism school, very often the principle is taught that you have to, you know, give attention to both sides of a controversy … write up an article, or do a radio/TV piece, presenting it as if the two sides had equal weight …

At that, Anna Maria Tremonti, host of The Current, seems to want to puff up her journalistic bona fides. She says:

As opposed to dealing with the fact, which is what journalists are also supposed to do … right!

Exactly! Just because you have differences of opinion doesn’t mean you give them equal weight, because in one case you might have the majority of the scientific community supporting one side, and a few rogue outliers on the other, but very often those rogue outliers are very, very convincing and they speak well because they work at it. Most scientists … are not that interested in kind of describing their work to the public, whereas when you look at the activists … a great deal of effort goes into how they should communicate their information.

This is an extraordinarily stupid, and grossly irresponsible thing for a CBC host to say! (Also gratuitous—the index in Schwarcz’s new book contains no entry for climate change, or global warming, or environment, or carbon dioxide, or CO2. In other words, he did not discuss the climate debate in his book.) We doubt there is any scientist anywhere, of any stripe, of any ability, who would say that climate change doesn’t exist. In fact, even any non-scientist who has ever heard of the Ice Age will logically conclude that climate changes naturally over time—it always has, and always will. Tremonti made a knee-jerk, flip, uninformed statement, devoid of any serious understanding of the issue at hand, typical of the kind of thoughtless CBC climate debate comment that you can expect to hear (or read) on any of the CBC’s public affairs programs from any of its hosts, at any time of the day or night.

Joe Schwarcz enthusiastically takes the bait of Tremonti’s comment with a “concrete answer” and “dogmatic remark”:

Exactly! And that’s one of the classic examples where articles are written apparently giving equal weight to both sides, and yet, when you speak to scientists who do the work—atmospheric chemists who really are up-to-date on all of the research—they will tell you there is no argument here. Climate change is real, and humans do play a role. (Emphasis added.)

First, it’s not true that the CBC, or the majority of the mainstream media, give “equal weight to both sides” of the climate issue. Most articles or radio/TV pieces are skewed to the alarmist side of the debate. Second, would the climate science “rogue outliers” be someone like real Canadian scientist Dr. Tim Ball, who is “up-to-date on all of the research,” and who does have “a solid scientific background, (is) aware of the peer-reviewed literature, (is) aware of how … the science community claim to know what (they) know”?

In any case, CBC mission accomplished! Once again the scientists and other experts who are sceptical about the hypothesis of manmade climate change have been sufficiently bashed by the CBC host, linking them to “rogue outliers”—or “activists” who worry about how to communicate their information. (Well, yes, when most of the mainstream media completely ignores them they do have to make a concerted effort to alert the public about the willful bias, the lies, the propaganda.)

After discussion of other issues, Anna Maria Tremonti asks:

How much responsibility does the mainstream media have to take for leaping on to, like, a big story and then torquing it or just, like, making it sound like so … so, ah, certain?

Well, you know, the job of the media is to sell the media, right?

Well, it should be, it should be … but it’s not to sell it. It’s to … um … put out information that we are told by some people is accurate, and they’ve studied it, right? So how do you, you know  …

Well, because things that are in the news generate more requests for being in the news. I think it is the job of the media to separate the sense from the nonsense. I think journalists have the task of doing the work but these days, unfortunately, people just want sound bites.

Anna Maria Tremonti changes the subject, and later on asks:

So, why should people trust you and what you are saying rather than the other sources that are out there trying to get attention?

Our allegiance is to the scientific method. The only thing that makes a difference is that whatever decision is arrived at, is arrived at through proper scientific methodology, not through hearsay, not through emotion, and not by listening to the all-knowing they-say-that. So, we go by the evidence and that evidence is furnished, of course, by the peer-reviewed literature. It’s not to suggest the peer-reviewed literature is infallible—it isn’t infallible because humans are humans … The referee has to assume that what was submitted is correct … If someone wants to submit fraudulent data, you can get away with it.

If only the CBC would bone up on the scientific method and proper scientific methodology. There are only four basic steps involved. They do not include programming computer climate models to produce a pre-determined outcome that, although consistently failing to match real-world data, is trumpeted as fact. “Who is trustworthy?” When it comes to the climate debate—not the CBC!