Christopher Monckton: I accuse. (You won’t believe who and what!) 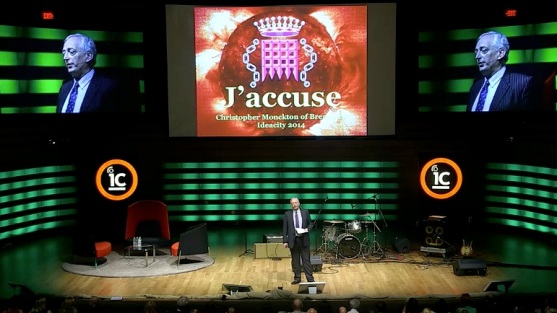 Must read, must see, must hear!

Christopher Monckton, the Viscount Monckton of Brenchley, gave an impassioned and hard-hitting talk on the issue of climate change at the ideacity conference in Toronto on June 18, 2014.

READ: Click here to download a PDF transcript, complete with slides: The Viscount Monckton of Brenchley at ideacity, Toronto

WATCH: Click here to see the video of his talk.

I accuse the world’s news media of failing to report almost any scientific evidence or fact, however relevant, casting doubt upon the party line on climate; in particular –

That the satellites show no global warming at all for 17 years 9 months;

That sea level may not be rising at all;

That hurricane intensity, frequency and duration are at their least in half a century;

That floods are not increasing globally;

That the fraction of the world’s land under drought is not increasing;

That wind farms kill rare birds by the million while adding to CO2 emissions;

And that the cost of preventing global warming that is not occurring is 10-100 times that of adapting to its consequences even if it were to occur.

3 responses to “Christopher Monckton: I accuse. (You won’t believe who and what!)”